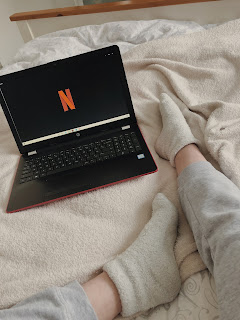 I think everyone at this point has binged Netflix A LOT during this lockdown period, and it is fair to say I am the same, however, I have only had Netflix for a couple of months (I’m behind the times I know) so I want to share some of my top picks! I know a lot of series are popular at the minute so I am going to recommend some shows that you maybe haven’t heard of/seen before.

My first pick is Elite, a Spanish thriller teen drama series, that follows 3 working class students in a high ranking ‘prep’ school. I managed to binge 3 series in 3 days which I think is very impressive, as I was honestly hooked from the start. One thing to bear in mind though is if you can’t deal with dubbed English, you most likely won’t enjoy the show!

One of my top picks that I have been watching for years now: Liz Gillies (Jade from Victorious as most will know) stars as Fallon Carrington, a business-savvy woman with a dynasty to uphold. This is a remake of the 80s show of the same name, but I do love the modern twists that the show has in store. I have recommended this show to so many people who have always said good things back to me, so it is definitely worth a watch. Series 3 has just started and I’ve binged it in 4 days, and 2 of those I spent at work most of the day so it’s fair to say I’m proud of myself!

Probably my favourite show of all time, I am a super geek and know so much about the show! It is the perfect comedy show for me, and I can relate to each character in a different way! I know this is pretty popular but I can’t recommend it enough!

My final recommendation is Fresh Meat, which is a show following a group of university students who share a student house. I do feel like this is an underrated show, and deserves some more recognition! I love how the storyline develops through first, second and third year of their time at university and as well as being hilariously funny, it can be very heart-warming.

That’s it for my current recommendations, if anyone has any others they want to recommend, leave in the comments below! Hope you are all doing well,