Week 3 and we're finally back at home after 2 weeks of being away from home! This week we have been based at a local college, planning our social action projects that we will complete next week! I would have to say this week has been the most stressful with many ups and downs but as always we bonded as a team and managed to push through raising a significant amount of money at our fundraiser! 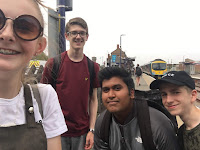 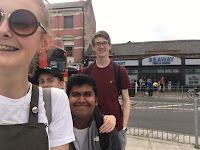 Our first meeting as a team for the week and it started on a high, learning that we could take the project we originally wanted, working on renovating a youth club alongside the team that originally had that project. I am looking forward to working with them, but I hope that we get on well as the teams have not really mixed as of yet! We began to plan our fundraiser also, before heading out into the town to play Grimopoly, Grimsby's version of Monopoly, which was a lot of fun! It was nice to talk to some members of the team I have spent less time with over the past 2 weeks, and also just fun to take lots of pictures!

Tuesday was a day of learning about Social Enterprise and business which to be brutally honest I did not enjoy. It was a hot day too which added to the levels of stress, because we all just wanted to be planning the fundraiser event. I did like some of the activities that we did, but it was too hot to concentrate fully! Afterwards however we went out to the park as a team which was so fun and enjoyable! Nights out with them are very fun!


I truly enjoyed Wednesday as we could have a lay in! But when we arrived at the college we had an inspirational speaker, John Harris, an ex-GB Paralympian in to tell us his story and it was very moving and it was amazing to listen to because it was sport related and quite motivating. He also brought his Olympic Torch, along with the medals he won and it's so nice to see that he had been rewarded for all the hard work he put in! The rest of the day was spent planning the last few bits for the fundraiser on Thursday, and then into the town centre to pick up everything we needed, which was a laugh then it was home to decorate cakes for the sale! 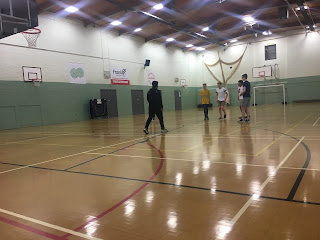 
The day of our fundraiser- a bake sale, tombola, games, live entertainment along with myself and Sophie walking 7 miles as a sponsored walk. As well as this our other leader India came back from her holiday on Thursday, and it was so good to see her! I honestly didn't think I would make it after suffering with illness and feeling sick for half of the walk! But after perking up a little and through determination I managed to make it to the 7 mile total! When we both arrived at the Youth Club where our fundraiser was held, we had some celebratory cake and a long rest! At the end of the day from the fair itself, we raised just over £200, and with the money raised from the sponsored walk we did, our total should raise to over £300 which is incredible! After the fundraiser, over half of the team went to the local park and just chilled out after a long day, and it was so nice, as now after the 3 weeks, I can call these people my best friends (it sounds cringey but they are just the best group, well in my opinion!).

I'm so excited now for the project next week and as always I will be blogging the final week, and it feels weird to say that because I think it has gone sooo quickly! I will be starting to write more blog posts to go up after my last NCS post next week so leave suggestions below! But adios until next week, love