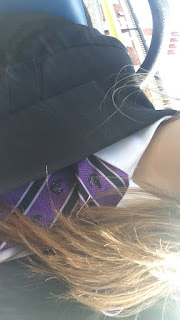 (this photo was taken this way, and there's no way I can change it, I've tried for about 30 mins!)
Year 10 is over, and I actually can't believe it because it's gone so quickly!! It's safe to say I have learnt a lot, not just academically but in life too. Today I'm going to tell you the 10 things that year 10 has taught me. (I don't know if you can relate to this, but if you can, let me know in the comments!!

I started year 10 with a group of about 6, boys and girls, but throughout the year there have been so many changes, which I never thought would happen, but I'm so happy they did. I also had a major change back in May, and my best friend became my boyfriend (it sounds so weird to say it), and so far we've had an amazing experience together, and I just hope it lasts... So if your life isn't going it's best then really just don't worry as it'll change and it will get better.

Throughout this year I've always been saying, I'm gonna fail and people have said to me, no you're not, you're smart. I've now realised they are right, I'm not being big headed, but I'm really not going to fail. I've had 3 sets of tests this year and I've come out with such decent grades, I'm happy that I can go into year 11 feeling really confident that I might do well in my GCSEs.

This doesn't really fit too much with school, but it is a major thing I have discovered. I live in a small town on the east coast, and my closest city is Hull or Lincoln, however they are fairly small cities. Last summer I travelled to many cities: Newcastle, Edinburgh, London, Liverpool and Birmingham, and in January I went to Manchester, and that's really when I knew that I work best in a city, the people, the environment is better for me.

Through secondary school, everyone goes through drama, and this can be with friends or with boys, and it can be horrible. You go through a time of being hated by a lot of people and believe me, it is one of the worst feelings. Now I'm at the end of the year, I'm not the only one who has said this, but it really isn't worth it. This year everyone has matured, and we've all realised that GCSEs are looming and drama needs to be left in year 10.

Everyone has off days, and I have plenty. No one is perfect, and no one is always happy.all the time. If you are, you're lying to yourself.

7. You always deserve a good pamper.

Pyjamas, face mask, food. What could be better on a Friday night after a hard week of school??

A major lesson I've learned this year. This has been the first year I have properly revised for all my exams, and I spent a lot of time making posters /flashcards / notes for all my tests, and it really has paid off, with getting C-As in all subjects!

9. My friends always have my back.

Going through so much in one year: fall outs, new friendships, exams, boyfriends etc. really proves who is really there for you and who isn't. but my friends; Libby, Faith, Kaci, Elliot, Emma, Taylor, Billy and so many more have always been there for me and I will always have their backs.

Year 11 is pretty much here, and I can't really believe it because it has gone so quick! I remember my first day in year 7, and this time when I enter the gates, I'll be in the oldest year, meaning that I have to set an example to all the years below. I also know I'm going to have to put a heck load of work into this year, and hopefully, I'll come out with the best grades I can!!

I'm sorry this was such a long post but it's one I've wanted to do for ages now. I hope you enjoyed it! What year are you going into when you return to school?? love