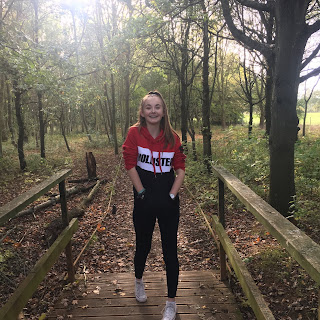 It honestly feels so weird to be back here but I've sure missed it! This post is just a big catch up really, and an explanation as to why I've been gone for so long. It is super chilled, and non-edited/pre-scripted or anything like that! In all honesty I'm watching The Apprentice: You're Fired and the guy who got fired is 21 and very very good looking so I apologise if this post makes no sense because I get distracted! The main culprit for such a big absence is sixth form. I started on the 5th September and I literally haven't stopped!

I take 3 subjects at Sixth Form, which are PE, Psychology and Maths, as well as something known as Pre-U, which is set up by Cambridge University. They are starting to get tough but I'm just trying to stay on top of it all, which I am doing pretty well through the use of many, many to do lists! But I'm happy to be taking a little break from it now that it's half term! I am going to try to get a couple of posts written and hopefully post once or twice a week.

Since starting sixth form, life has got 10x busier. I attend sixth form every day 8-5 which includes an hour journey either way, Saturdays I dance, and Sundays I work, so finding time to blog has become a rare occurrence and I truly apologise for this. I've also been a little demotivated: in my content, in myself and because of others. I believe the content I have been planning isn't right for me so I'm still working out what is the best way to take my blog and for now if that means experimenting I'm happy to do that.

Since starting sixth form I was a little hesitant to post on my blog and share it with the new people I have met (to give context, I go to a sixth form an hour from my hometown, in a grammar school that 80% of the students attended in years 7-11) because of the response and it's mainly been positive other than a little bit of hate I received about 3 weeks ago now, and I think I know who it is, but either way I'm stronger than I am and it's not letting me stop this journey.